It was approximately 6:48 pm on July 17, 2007 when TAM's [now Latam] Airbus A320, en route from Salgado Filho airport in Porto Alegre, attempted to land at Congonhas airport in São Paulo. The runway was wet and, because of a recent renovation, still had no grooving. The landing maneuver was not successful: the Airbus ended up crossing the runway and hitting a cargo building belonging to the company itself, which was located in front of the São Paulo airport. The crash caused the plane to explode and catch fire. That accident, which turns 15 this 17th, caused the death of 199 people, 12 of them on the ground.
At that time, two months before the accident, Jucelino Luz, published in Revelation Magazine - edition II - and Revelations III Book about the TAM accident, warning that there was a possibility of this accident happening - the company itself was alerted.
Later, the sensationalist media preferred to ignore the warnings ...After the accident, to try to escape accusations or possible future responsibilities, they joined forces in an attempt to point out defects in Jucelino Luz's letter - they invented fragile arguments without materiality.
Jucelino Luz was persecuted (threatened) in 2007, for trying to save the lives of innocent people. They tried with a dirty maneuver - through an article, with evidence of being paid and with the help of friends of evil, to bring down the spiritual works and spiritual works of the visionary. "God never abandons the cause of good"-we are sorry for the victims, we leave registered our deep feelings. 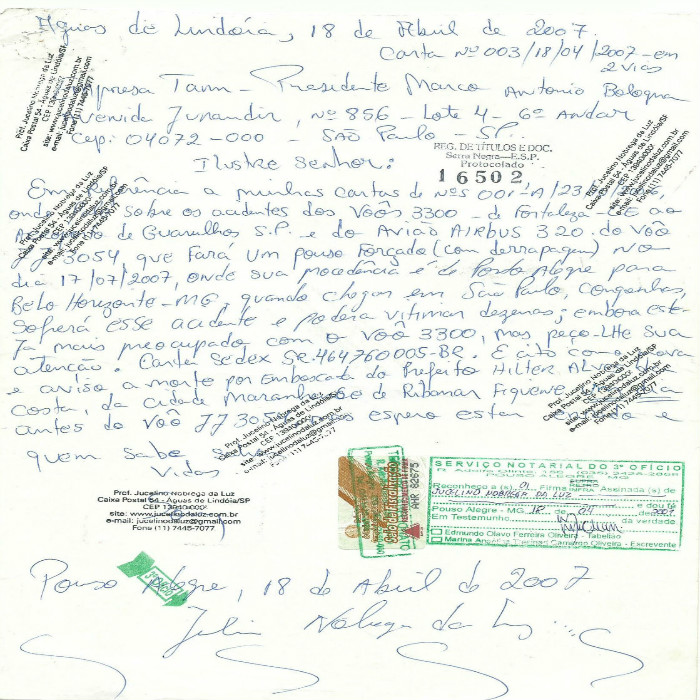 The letter of Jucelino Luz was analyzed by the forensic, graphotechnical, criminal expert Professor Reginaldo Tirotti,,, in his report points out that the letter is true and unquestionable . 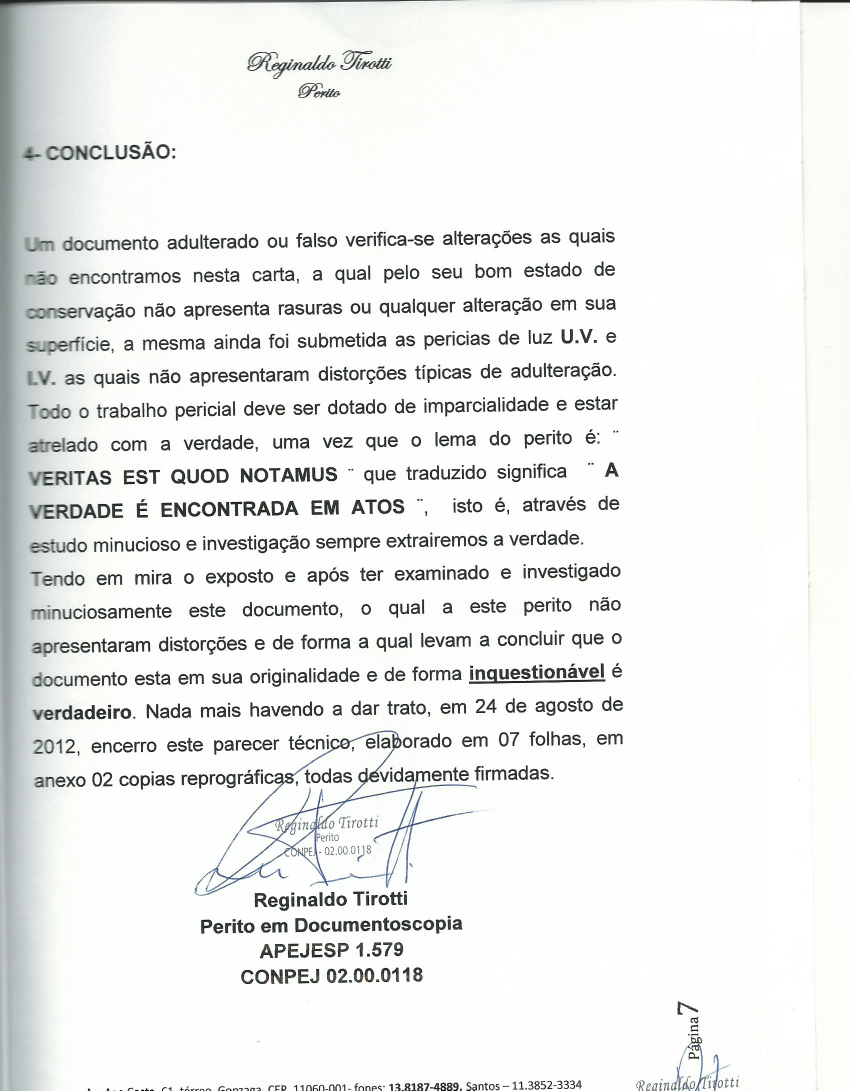 Final technical report of the forensic, criminal and graphotechnical expert (below)

Many investigative journalists were outraged by the flaws and the alleged "editing "of this sensationalist big media program - which was unethical, used an operating mode rejected by professionals of true journalism. An obscure and dubious means of gaining followers.
After 15 years, no one has been held accountable or served time for the accident. In 2015, the Federal Court ended up acquitting the former director of the National Civil Aviation Agency (Anac) Denise Abreu, the then vice president of operations of TAM, Alberto Fajerman, and the director of Flight Safety of the company at the time, Marco Aurelio dos Santos de Miranda e Castro, who had been indicted by the Federal Public Ministry (MPF) for "attempt against the safety of air transport," in the culpable mode. For the Justice, the defendants did not act with malice (intention).

For years, the lack of punishment for the accident has become a deep mark for the victims' families. According to news reports: "The major punished were the victims who died and the condemned were their families, who were left without their loved ones and saw no justice," he said, in an interview to Agência Brasil.
Possible causes of the accident
The accident was investigated by three agencies. One of them, the Center for Investigation and Prevention of Aeronautical Accidents (Cenipa), of the Air Force, concluded that a number of factors contributed to the tragedy. The Cenipa report found, among several points, that the pilots unknowingly moved one of the controls to idle position and left the other in climb position. The aircraft's computer system mistakenly understood that the pilots wanted to climb. 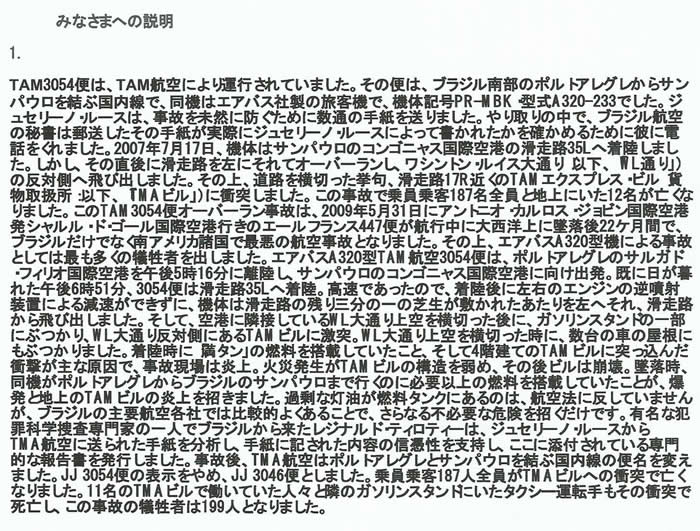 Tributes
LATAM Airlines plane, formerly TAM Linhas Aéreas, takes off from Congonhas Airport and flies over the July 17 Memorial
On July 17, 2022, several families will return to the airports in Porto Alegre and São Paulo to pay homage to the dead. In Porto Alegre, a mass will also be celebrated in memory of the victims at the Metropolitan Cathedral of Porto Alegre.
In São Paulo, the families will gather in the morning at the 17 de Julho Memorial, the place where the accident occurred. The Memorial will be decorated with birds that will be placed under the name of each victim. Throughout the day, family members will go to the site to bring flowers and dedicate their prayers and thoughts to their loved ones.
May God bless you all!